Developer Barry Morris has called on the ACT Government to inject some funding into Manuka shops to spruce up its tired public spaces as construction continues apace on private sector projects that should help restore the precinct to its former glory.Mr Morris was speaking at the topping-out ceremony for the first stage of Morris Property Group’s $300 million 414-unit Renaissance project on the site of the former Stuart Flats public housing complex in Light Street, behind St Paul’s Anglican Church.

Morris Property Group bought three of the four former public housing blocks from the ACT Government in 2019. Mr Morris, whose company developed Manuka Plaza 20 years ago, said the area needs rejuvenation.“We’d like to see the ACT Government start putting some more dollars into refurbishing the public realm because it is tired and needs some work,” he said.Mr Morris said this project would live up to its name and bring new life to the Manuka precinct by eventually housing about 1000 people within walking distance of Manuka shops.

The entire project will deliver the 414 units across eight buildings, with the first stage comprising 93 of them.Stage 1 experienced unprecedented demand and was 92.5 per cent sold, with only a handful of three-bedroom, one two-bedroom and two one-bedroom apartments remaining for sale. It is due to be completed in August 2021 with residents moving in the following month. Most of them will be older Inner South residents looking to stay in the area and enjoy the amenity it provides. Mr Morris said the days of Canberra people retiring to the NSW South Coast no longer holds true as they seek city services and amenities and choose to stay near children and grandchildren. 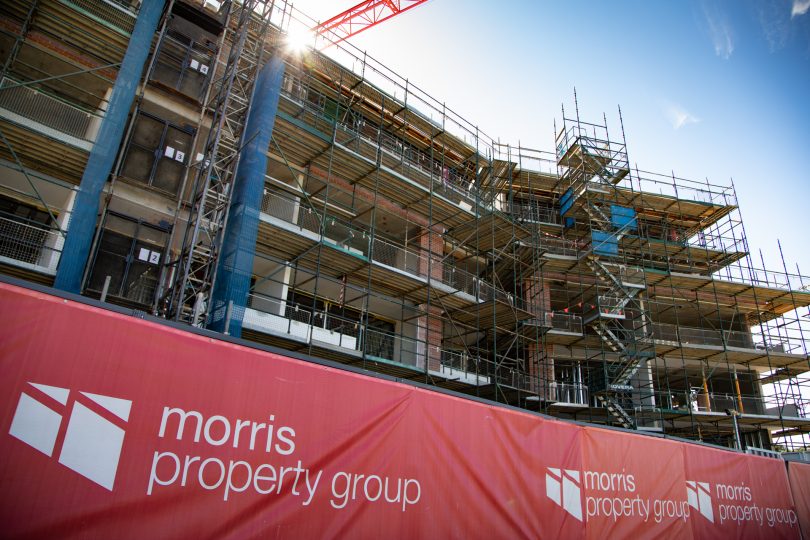 And the amenities they want are more than just cafes and restaurants, he said. “The days of ‘let’s go down the coast’ have changed significantly in more recent times as people want to gravitate back to an urban environment – a city environment with services and facilities, health and welfare,” said Mr Morris. The original 100 units allowed on the site was reduced to 93 after some buyers purchased multiple units to have more space and had them redesigned into bespoke single, larger apartments.

“What we found was people are wanting to replicate their home in Forrest, Red Hill or Griffith in apartment living,” said Mr Morris.“Some of those things are unrealistic, but where we can we design one on one with people to deliver the home they want – the home of their dreams for the last stage of their lives.”The two other stages of Renaissance include a smaller, four-storey boutique development of 30 units on Stuart Street, and Morris Property Group’s second major build-to-rent project of 282 units across six buildings fronting Captain Cook Crescent, which will meet the strong demand for rental accommodation in Canberra.

The slab will be laid for Stage 2 this week, and the project is expected to be completed by March 2022. Stage 3 will be delivered progressively from late-2022 to 2023.It was a tough year for Morris Property Group in 2020, which had to defer or reassess projects due to the impact of the COVID-19 pandemic.“Who would have thought we’d be here in April 2021 topping out a project,” said Mr Morris.