Living the life at Koko Broadbeach

There are few places where you can have a luxury apartment on the doorstep of stunning, rolling surf and a pristine beach that sweeps north and south as far as the eye can see.

Where else can you step out from your five-star building into a neighbourhood precinct with the beach on one side and great retail on the other? Or enjoy some of the best destination leisure, dining and entertainment options the nation has to offer within a minute’s walk from home?

This is Broadbeach, arguably the new, true beating heart of the Gold Coast, which gives Waikiki a run for its money − the only other worldwide destination that might come to mind.

But then Hawaii isn’t about to stage an event second only to the Olympic Games.

The Gold Coast will play host to the XXI Commonwealth Games in April next year, and Games-linked infrastructure investment of around $17 billion has further cemented the optimism that has abounded the region in recent years. The City of Gold Coast has already been outpacing the State in terms of property capital growth and the nation’s average population growth.

Any new development within ‘cooee’ of the centre of Broadbeach is set to enjoy the types of gains in property values that have seen the Gold Coast surge ahead of other Queensland regions. Domain statistics show unit price gains on the Coast outpacing Brisbane and the Sunshine Coast by a factor of more than two to one. 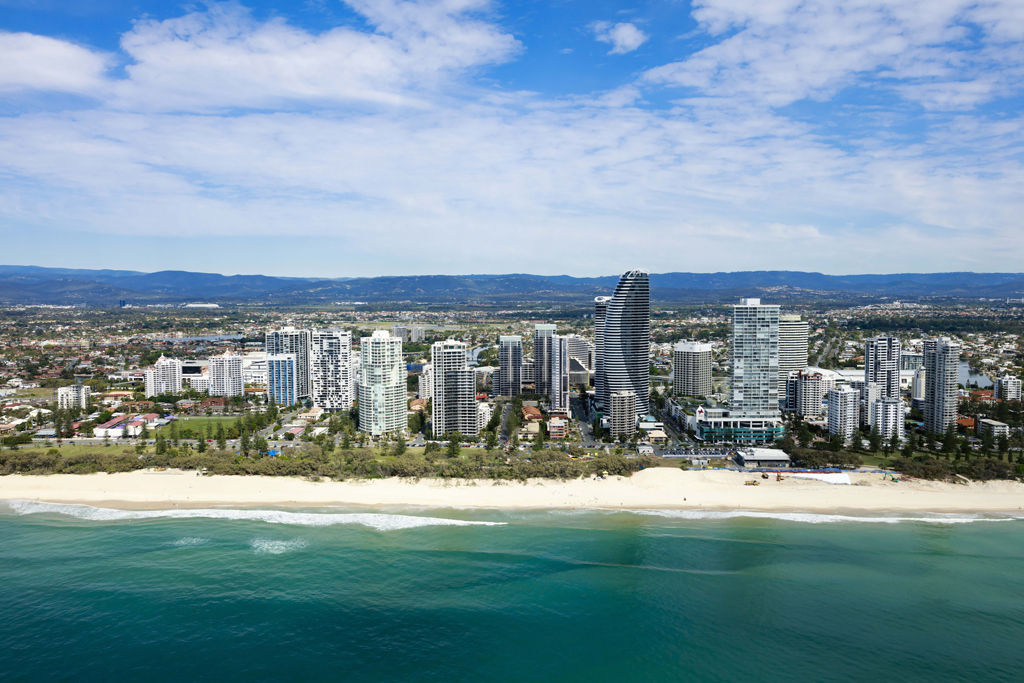 The Gold Coast will play host to the XXI Commonwealth Games in April 2018.

And so to Koko, the latest addition to Broadbeach in trendy Elizabeth Avenue: 99 apartments over 31 floors which sets a new standard in sophisticated, light-filled, beachside living.

The opportunities are only limited by your imagination.

Wake to the sounds of the ocean, slide open the doors to the balcony and breathe in the invigorating ocean air before heading to the dedicated resident leisure floor with its gym, pool, sun lounge areas and yoga lawn. If a beach walk, jog, surf or swim is your thing, Kurrawa Park and one of the best beaches in the world, with its crystal-clear ocean, are just metres away.

Pick one of the nearby cafes for breakfast with friends or head back for coffee and more in your state-of-the-art kitchen with its first-class European or ultra-luxury US-handmade appliances.

If it’s a work day, cross the road to the Gold Coast light rail station with stops all the way north to Griffith University (about to be linked to the main Brisbane line at Helensvale). Alternatively drive out (all apartments come with parking) to the nearby M1 north to Brisbane and south across the NSW border.

Time for leisure and some retail therapy? The newly refurbished Pacific Fair shopping centre, one of the largest in Australia, is a short walk away and a great place for lunch if you wish to venture a little further than the Oracle and Oasis retail and dining precincts adjacent to Koko.

Koko Broadbeach residents will have access to a gym, pool, sun lounge and yoga lawn.

In the evening, as the sun goes down and the Gold Coast lights up, dine against the backdrop of the superb views from your north facing two-bedroom apartment or three-bedroom sub penthouse, or step out for a drink and a meal in one of a host of bars and restaurants. Finish off the evening with a visit to the Star Casino and entertainment complex just a short walk away.

Koko is the latest project within the Morris Property Group portfolio, whose design brief will deliver a boutique, stylish development that combines beach living with city style.

Barry Morris, Morris Property Group principal, regards Broadbeach as one of the best retail and lifestyle precincts on the Gold Coast courtesy of what he calls a continually evolving civic environment.

“There have been major improvements to the elements that make Broadbeach so special; its safe and clean beach, parks and open space, industry leading restaurants, Casino, Pacific Fair, Oasis and nightlife have all contributed to increasing the value of Broadbeach as a standalone brand,” he said.

Morris believes the boutique nature of Koko will attract southern investors looking for greater value outside the increasingly expensive Sydney and Melbourne markets. At the same time there has been a lot of interest from buyers who are “trading up from an existing Broadbeach holding into Koko”.

Location is among the key selling points for Nicholas Clydsdale, director, CBRE Residential Gold Coast:  “Koko Broadbeach is located on the Gold Coast’s next “it” boulevard. Elizabeth Avenue is situated metres from the refurbished Star Casino and Hotel, the Oracle precinct and the Kurrawa Beach and Park,” he said.

“The development’s boutique nature will suit downsizer and maturing professional owner occupiers. Interestingly, Broadbeach is the preferred suburb for those relocating from inner east Melbourne… Initial interstate investor enquiry has been strong too, especially from the growing ‘RENTvestor’ group”.

Larissa James moved to the Gold Coast after selling up in outer Sydney six months ago when partner Joel, an IT engineer, was offered a transfer north. Eager for a change of lifestyle, and with an ambition to live close to the beach, she had looked at apartments from Paradise Point south to Coolangatta.

“As soon as we had the chance we took a couple of weeks out to see where would suit us best. Broadbeach was a stand-out, just because of everything so close by, shopping, restaurants and nightlife when we want it – and, to be honest, it just seemed to us to have a better vibe than some other suburbs.”

Koko Broadbeach is located on the Gold Coast’s next “it” boulevard, Elizabeth Avenue.

The couple moved into a two-bedroom apartment three streets back from the beach and while they accept their needs might change when they finally decide to start a family, their current arrangement suits perfectly.

Recent statistics from the research and advisory group Urbis (August, 2017) underline the strength of Broadbeach investment potential with 12-month, median price growth in Broadbeach apartments of 18.6 per cent. The Gold Coast vacancy rate, meanwhile, came in at 1.7 per cent, the lowest of Australia’s major cities.

The Broadbeach population is expected to grow by 3.3 per cent to 2036, 1.1 per cent above overall Gold Coast growth.